Posted on February 13, 2017 by fitzjameshorse

Take “Operation Harvest”. The grandiose title for the failed IRA Border Campaign 1956-1962. I am old enough to remember  it …obviously vaguely. But I will never forget the B Specials standing around the the RUC Barracks at Platers Hill, Coalisland. Nor will I forget the newspaper headlines in late January 1961. A member of the RUC was killed on the day my last grandparent died.

Of course, I would later know some of the men who had taken part in that campaign. Or more likely interned because that campaign never really affected Belfast. During long walks on summer nights, men who had been “involved” were pointed out to me by my father.

The only real legacy from 1956-1962 is the ballad “Sean South from Garryowen”. The IRA decided to “go political” and a lot of members voted with their feet and walked away, mumbling that the leadership were “commies”.

See….this is a strange thing about the “Republican Movement”. It is oddly lacking in a political philosophy other than “Brits Out”, which is a very noble sentiment.

Of course a few years after walking away from the “Republican Movement”, the anti-Commies were back in charge as the Provisional IRA. The Provos routinely recruited  teenagers in West Belfast, promoting their anti-Commie credentials. The joke at the time was that the Provos went to Mass once a week and the Stickies (“Officials”) went  to Mass once a month.

Of course by the late 1970s, the Provos adopted a leftist philosophy. But I dont think it was ever more than lip-service. The Provos needed the respectability of “left wing” international revolution….whether it was”comrades” in the PLO or ETTA or whatever….just never enough to scare off wealthy American donors. 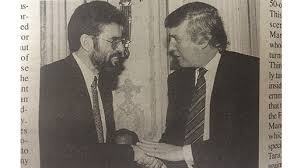 So….I dont take all that stuff down at the International Wall all that seriously….murals PLO, ETTA…not to mention Frederick Douglass, Leonard Peltier and Nelson Mandela.
I is all part of a narrative constructed for Sinn Féin, rather than any accurate portrayal.
After all John Mitchel, with that monument in Newry was a supporter of slavery in USA and two sons died for the Confederacy. Of course some Republicans will claim that there is no comparison between 1861 and 2017. Indeed…but during his stay in United States, Thomas J Clarke was not overly fond of black people. Again no comparison …people might say.
But Republicans do like to create or rediscover a narrative. The emphasis recently on Winnie Carney is a case in point.
And while we all like a good chorus of Spanish Civil War song “Viva La Quinta Brigada”, there are oddly few ballads that commemorate the IRA bombing campaign in England during the Second World War.
and then…Sean South…and then the “Marxist IRA”.
then…the Provos
then the Marxist Provos.
To be honest, I have three Che Guevara Tshirts. It is mostly a fashion statement or maybe some kinda statement about myself…that I am a very unlikely member of the 1960s Counter-Culture. It is always the quiet ones.
And likewise Sinn Féin are making a fashion statement with PLO badges.
It is a pattern with Sinn Féin
Their commitment to the Irish language does not extend beyond a cupla focal to satisfy their base.
Their commitment to Gaelic sport does not extend beyond wearing an Antrim track suit in a Falls Road bar.
Their commitment to revolutionary socialism does not extend beyond a Che Guevara Tshirt.

Only the young can be duped.
So…Martin McGuinness promising a “warm welcome” to Donald Trump does not surprise me. Martin is much the same age as I am.
Alas Michelle O’Neill, considerably younger than me says it is “inappropriate”
And Gerry Adams, even older than me says he will go to the White House for St Patrick’s Day…”if invited”.

Can anybody be really surprised?
It is just that Sinn Féin are no longer in fashion with their Che Guevara Tshirts. In a few months, they will be selling Donald Trump baseball hats in Sinn Féin bookshops.

10 Responses to Sinn Féin: From Che Guevara To Donald Trump