I am on my way home from a Éirigí organised protest at the visit of Charles Windsor to Ireland. Of course Éirigí and I are hardly soul mates but I think it was important for a republican-nationalist socialist like myself to attend. 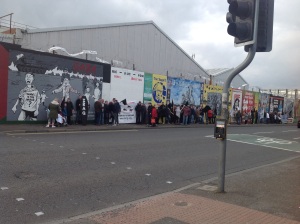 I have to say I was disappointed at the turnout. It deserved better. This is maybe evidence of the extent that Sinn Féin prevails in West Belfast. Now effectively a one-party State. Thru Politics and “community groups”, Sinn Féin is dominant. Just one year ago, Sinn Féin organised a protest at this very spot….The International Wall at Divis Street to protest the detention of Gerry Adams for questioning by PSNI.

Shortly after I took this photograph, the small group of protesters…I say no more than fifty people moved across the road and gathered at the traffic light (foreground) where just one person spoke. I wont name him as I dont have his permission to so do.

Obviously Éirigí are protesting the very presence of “Prince” Charles in Ireland. And indeed drew attention to the long tradition of British “Royal” intervention going back to 1169. And indeed the negative and homicidal and genocidal role that the British Empire has had on the world. There were at least three coffin-shaped placards labelled “Iraq”, “Afghanistan” and “Ireland”. The short speech concluded with the words of James Connolly.

The protestors will be dismissed as cranks….or in Sinn Féin terms “enemies of the Peace Process”. But in this instance they deserve better.

I heard nothing thaat a republican of any nuance including SDLP and Sinn Féin could disagree with. Of course there was criticism of the Sinn Féin Leadership.

But I think beyond Éirigís position there are plenty of other issues. The spin put on that “handshake” by the English Media paints Charles Windsor in a much better light than Gerry Adams. Thats to be expected but the image remains of a noble and grieving man who dutifully shook hands with the bloodsoaked hand of a “terrorist”. Thats not the image Sinn Féin sought and very naive of their strategists to think they would come out of the photo opportunity looking as good as Charlie.

My own basic objection is that this was …like the visit of President Obama…little more than “optics”. Dutifully these VIP visitors …Obama, Elizabeth Windsor, Charles Windsor and the rest of us patronise us with a few words in Irish, a verse from Seamus Heaney or WB Yeats, sip a Guinness, watch a performance of Riverdance and go home.

And further this was not about Peace with Justice.

Gerry Adams has no right to be talking to Charles Windsor, the unapologetic Colonel in Chief of the Parachute Regiment before the issue of the Ballymurphy Massacre is addressed. And purely from a unionist point of view there will be bewilderment at their future Head of State of Britain selling them out.

Gerry Adams needs to reconcile himself with less prominent people than Charles Windsor.

Once again ORDINARY people are sold down the river in the name of Conflict Resolution.