Posted on January 26, 2015 by fitzjameshorse

The tall building is Liberty Hall, Dublin. It was built in the early 1960s. And has dominated the skyline for as long as I can remember. It is the Headquarters of SIPTU and other Irish trade unions. 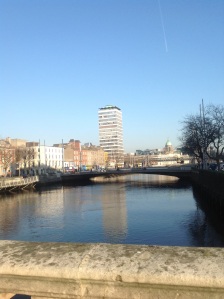 The preservation of historical sites is a strange thing. We often dont recognise the importance of a site until long past the event itself.
Liberty Hall is such a place.
It replaced another “Liberty Hall”. Old photographs of the original building show it draped in a banner “We Serve Neither King or Kaiser”, a reference to the Irish Citizen Army (the paramilitary wing of the Trade Union movement in the years up to and including the Easter Rising of 1916.
It was at the old Liberty Hall that the 400 men and women of the Citizen Army and some Irish Volunteers mustered on Easter Monday morning in 1916. They marched mostly to the General Post Office where the Proclamation was read and five of the seven signatories…James Connolly (commander of the Citizen Army) among them would be based during Easter Week.

Two plaques inside the Building. One references the 1913 Lock Out and people killed. The other references the Irish Citizen Army, the old building and 1916.

Trade Unionism has changed. The photographs whether in Dublin, Liverpool or New York City seem distant…grainy black and white images in a colourful, digital age.

Only four generations separate the women trade unionists, honoured outside Liberty Hall from the seven young women, dressed for a “hen night” (bachelorette party) getting off the coach at the Bus Station. They will not have noticed the trade union women, all long dead. A different world. 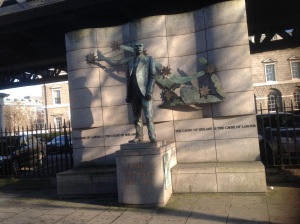