Back To The Future

Posted on November 29, 2012 by fitzjameshorse

Now this is a strange coincidence. In 1981, I started going out with Mrs Fitzjames Horse. And on a Saturday before Christmas in the foyer of the old Co-Operative Department Store in York Street. Those younger readers unfamiliar with the old “Co-Op” this is the building across the street from the Belfast Campus of the University of Ulster. It is now occupied by the College of Art……and the newer part is still the Forum Building.

Anyway a lot of people standing around. We overheard a young boy saying to his father.”Its a funny colour daddy” and the father replied “Its not painted yet son”……….which made a few jaws drop.

In 1981, I worked in the Lisburn area and was a regular passenger on the train to Belfast (to meet the future Mrs FJH) which went past the De Lorean plant at Derriaghy. Certainly an impressive sight to see the new cars all lined up ready to be sent off to United States. And on a Sunday morning as we drove from Belfast to my home in Dungannon……we often saw a lot of De Loreans on the motorway. I think their test drivers might have had special permission to use the motorway for high speed testing. 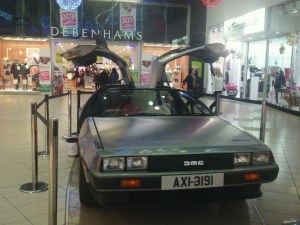 So thirty one years later, I am in a different shopping centre…..actually looking for a gift for our “Pearl” Wedding Anniversary….and here is another De Lorean. Make a small donation to the Shopping Centre’s charity and take a photograph. Happy memories.

So not only did Belfast build the Titanic….we built another disaster…..the DeLorean. We really are totally useless….lets celebrate it! Our Time. Our Place.

This entry was posted in Uncategorized and tagged Belfast, De Lorean, Titanic. Bookmark the permalink.

3 Responses to Back To The Future