Only A Grandfather Will Know

I have been feeling nostalgic recently. I suppose it is true that at a certain point, your entire life flashes before you.

My maternal grandfather died thirty years before I was born (an accident at work).

I am kinda lucky that I have memories of the other three grandparents who died when I was 4, almost 7 and 8.

But I have no concept of the grief. Back in 1956, 1959 and 1961, children did not go to funerals so while I do have a memory of the Saturday lunch time (1959) that my Uncle Jackie came to break the news to my father and the day (1961) when my mother took me out of school, I have no memories of coffins, wakes and gravesides.

It would have been different if I was a teenager. I think it is right that young children (around 5 or 6) are brought to funerals but one of the saddest aspects of a funeral is the grief of children and grandchildren.

One of the lovely things about weddings is the presence of grandparents.

Many of you will know that I try to use my Smartpass every week. Every week,  try and travel (for free!) to……..wherever.

On Tuesday of this week, I was in Temple Bar in Dublin. Of course, I am there several times in a year but on Tuesday, I really looked around me.

I had time for one more journey and for no obvious reason I chose Kells in County Meath. But rush hour Dublin was a bad choice and I worried about getting back to Dublin before the last train left for home.

I got off the bus in Dunshaughlin and looked around for a bit. The commuter towns around Dublin…Ashbourne, Ratoath, Enfield, Celbridge are a curious mix of old village and suburbia. And Dunshaughlin is like that. Then I came across this. 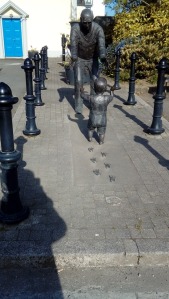 I felt emotional. My youngest grandson is 2 years old. And he is not the first grandson to run towards me. There are two more (16 and 11). And there is a granddaughter (now 6).

I said earlier that I had no sense of grief. But it is really only in recent years I feel it deeply. The feeling in my heart now must be the same as my grandfather felt sixty years ago. The look in my toddler grandsons eyes……I must have had that look.

You counted four grandchildren. There is a fifth…a girl (Aoife) who was “born sleeping”. She would be 14 now and that is the biggest pain I have ever experienced. So she never got to run towards me with her arms out.

But……someday …I hope that she will.

This entry was posted in Uncategorized and tagged Grandchildren, Grandparents. Bookmark the permalink.

2 Responses to Only A Grandfather Will Know