Posted on January 22, 2016 by fitzjameshorse

So I picked up the “Easter” stamps in Dublin.

In strict terms there are two kinds of postage stamp. A “definitive” stamp is in everyday use, often for several years. A “commemorative” stamp is intended to mark a special person, event or theme and is generally only available (if at all) for a limited period.

My previous posts suggested that there was (almost) a media blackout on the “Easter” stamps. While it has been known for some weeks that the first issue in 2016 would be on 21st January, it was only last week that I learned it would be a “definitive” issue of sixteen stamps so I did not think it would be specific to 1916. The grapevine suggested that it WAS Easter but the failure of the online edition of the quarterly bulletin from An Post suggested an unusual degree of secrecy. Oddly the programme for the year was released and I have already blogged about this. The first issue would be Definitives themed for 1916. This is quite unusual…definitiives are usually more bland….Birds, Animals, Fauna. But the secrecy did worry me a little. Was there something controversial?

Well…no. While An Post marketing section have been very slow to advise nerds like myself, all information was already in giveaway calendars distributed in the GPO before Christmas ….so no conspiracy theory.

Last night, I was emailed a link to photographs of the stamps. sHould I have been concerned?

Well the Irish readers of this Blog are members of the pan-nationalist family. So your opinion is as valid as mine.

The fact that these are “definitive” stamps is in itself a very definitive (pun intended) statement. These stamps will be available in every post office for a long period of time, possibly beyond the end of the year. That will ensure a lot of use. And in producing sixteen designs, it makes Easter Rising a much more potent symbol of the Irish Nation than the single commemorative due to commemorate the Battle of the Somme in July.

There is no equal billing. The Somme is a dutiful footnote.

The sixteen stamps are printed thru computer terminals. Called , SOAR (Stamps on A Roll) the design at #1 will appear again as #17,#33 and so on until the end of the roll. For convenience, the Philatelic Shop in the GPO will sell them as strips of four, divided into four themes…the Leaders and Icons, the Participants, Easter Week and the Aftermath. 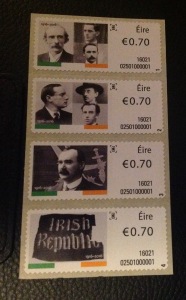 So the first strip features Thomas Clarke, Sean MacDiarmada and  Eamonn Ceannt on one stamp, Padraig Pearse, Joseph Plunkett and Thomas MacDonagh on the second stamp, James Connolly on the third stamp and the battle-scarred “Irish Republic” flag on the fourth stamp. It is stressed in the information I have received tha this does not show any prededence of any signatory of the Proclamation. It is intended to show the three organisations that led the Rising. …the Irish Republican Brotherhood, the Irish Volunteers and the Irish Citizen Army. I am not entirely convinced by this as Ceantt was also a Volunteer and all were IRB men. But this is a quibble rather than a major point. 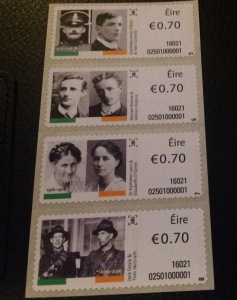 Participants…it was always assumed that the Dublin Metropolitan Police would be honoured and that this would be controversial but effectively the decision to include James O’Brien, the constable who would be the first fatality of Easter Week is balanced by Captain Sean Connolly of the Irish Citizen Army on the same stamp. Captain Connolly shot and killed Constable O’Brien at Dublin Castle and was himself killed shortly afterwards at the City Hall. So this stamp is a major surprise.

Lt Michael Malone led the Volunteer unit at Mount Street Bridge which inflicted heavy casualties on the Sherwood Foresters. He was killed in this heroic action.  He shares a stamp with his brother William who was killed in Belgium in 1915 fighting with the Dublin Fusiliers.

Dr Katheen Lynn , an officer in the Irish Citizen Army was second in command to Captain Connolly at Dublin Castle/City Hall and took over the command when he was killed. She shares a stampwith Nurse Elizabeth O’Farrell who served in the GPO and brought the messages of the surrender. Again it was always anticipated that the role of the “1916 Women” would be recognised and two worthy candidates.

The fourth stamp features Volunteers Jack Doyle and Tom McGrath. Representing the rank and file, it is an iconic photograph, one of only two known to have been taken inside the GPO during Easter Week. 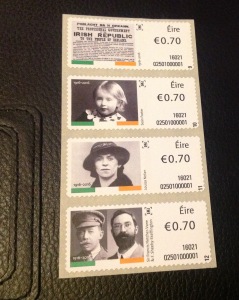 The theme of third strip is the Week itself and appropriately the first stamp is the Proclamation itself. It was also known that Civilian casualties would be acknowledged and the child on the second stamp is Sean Foster, one of the youngest people to be killed during the Rising.Although most civilian casualties were inflicted thru British callousness or intent, I will not be looking up indices and internet to establish the precise circumstances. The only relevance is that he was a child…and one of the most innocent person to die.

Louisa Nolan was a civilian who attended to the wounded at Mount Street.Heroic of course and should it make a difference that ahe was awarded an honour by “King” George V.

The biggest surprise of the sixteen stamps is the final stamp in this strip. Most Irish people will be familiar with Francis Sheehy Skeffington, the pacifist, socialist and advocate of womens rights who was the highest profile civilian casualty. He was shot by an unofficial firing squad on the orders of Captain Bowen-Colthurst, who had lost control and was having completely innocent people in cold blood. But Sheehy-Skeffington shares the stamp with the British officer who reported the series of attrocities, Sir Francis Fletcher-Vane. In modern terms he was a whistleblower. The war criminal Bowen-Colthurst spent just over a year in a mental hospital before being released and Fletcher-Vane was dismissed from the British Army. 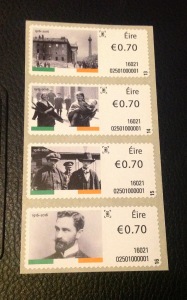 The theme of the fourth strip is the Aftermath of the Rising. The first stamp shows the burnt-out shell of the GPO. The second stamp shows children gathering firewood. The third stamp shows prisoners in detention. The final stamp is Roger Casement, the rebel agent who was hanged in London a few months after the Rising had collapsed. He had been arrested in County Kerry a few days before Easter Monday.

Am I happy? Yes…I think a story has been told thru the medium of stamps. The Easter 1916 story is a story that is worth telling. No need to compromise on the facts. The credit is due to Dr Fearghal McGarry of Queens University, Belfast and Lar Joye, who is still (I assume) at the National Military History Museum at Arbour Hill Museum.

Is anything missing here? Well, all people interested in the history of 1916 will know of the Forgotten Seven….Willie Pearse, Sean Heuston, Con Colbert, John McBride, Ned Daly, Michael O’Hanrahan and Michael Mallin who were executed but are not as well honoured as the signatories of the Proclamation. It would I think be unfair if they were overlooked for yet another generation. I think we owe them.

But I think there is scope to develop this theme, as started with sixteen stamps. I can certainly see supplementary issues during this year. But maybe we are seeing a pattern as to how the rest of the Decade will be commemorated….thinking at random, there are a lot of other names we will recognise over the next few years….Constance Markievicz, Cathal Brugha, Michael Collins, Terence McSwiney, Thomas MacCurtain, Kevin Barry.

There is still a lot of mileage in the Decade of Centenaries.

This entry was posted in Uncategorized and tagged decade of centenaries, Easter 1916, Easter Rising, Philately. Bookmark the permalink.