Posted on November 8, 2015 by fitzjameshorse

When I was a child, I used to think that people wearing poppies were going to weddings.

Of course in the 1960s, there were a lot of sprightly 70year olds who had memories of World War One. But essentially the poppies were worn by our Protestant neighbours. Or members of the RUC. Or local newsreaders on TV. Whoever wore them…nothing to do with us.

There are no survivors from WW1. Those veterans are all dead. The focus has long moved to WW2…all very noble of course. The downside is that those men who I knew as 45 year olds are now in their 80s. Their use as heroes is increasingly limited.

This is why James McClean is absolutely right. 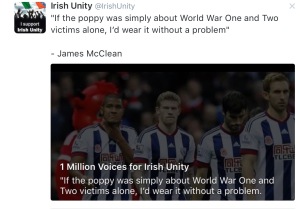 James is a moderately successful Premiership footballer from Derry. He plays for the Republic of Ireland and that choice makes him unpopular with unionists and the usual suspects in LetsGetAlongerism and their search for a Norn Iron identity.

James has refused to wear a poppy on his shirt when he plays…including yesterday  playing for West Bromwich Albion at Old Trafford in front of 76,000 fans….who of course booed his every move. By any standards, his stance is brave. He has put his Irishness and his republicanism ahead of popularity. He is outspoken.

But he is right.

Poppy Day is not about WW1 and WW2…..it is about validating British militarism in Palestine, Aden, Cyprus, Kenya, Malaya, the Malvinas and of course Norn Iron.

Something of an irony that when the Norn Iron conflict was at its worst in the 1970s, nobody in England really cared how many Soldiers were killed in North Belfast and South Armagh. An occupational hazard for young working class men who were not really considered employable.

Two things happened. One …John Major…the “everyman” Prime Minister from the early 1990s who worried that Remembrance Sunday was losing its place in British culture and he institutionalised a two minute silence at the eleventh hour on the eleventh month.

Coincidently on the first such occasion, I was working for three weeks on detachment in London. iT was 1992 or 1993. Either way, it was 11th November and it was a Saturday. I made the short bus ride to Covent Garden to see what would happen…..and frankly not very much happened. Some people did stop what they were doing. Most did not. It all seemed very uncomfortable.

But the second thing that happened was more wars….and especially since 2001, unpopular wars that were based on lies. The modern Remembrance Season starts earlier and the narrative of “our heroes” is more about providing cover for politicians. And Premiership Football, X Factor, Strictly Come Dancing…all play a part.

And likewise in Norn Iron, who really served in the mainstream British Army in Malvinas and Afghanistan. The vast majority of posers standing around cenotaphs in Belfast, Lisburn and Portadown today parading their medals , served in the discredited RUC and UDR. Do I really give a damn about their “service”?

This entry was posted in Uncategorized and tagged James McClean, Poppy, Remembrance Sunday. Bookmark the permalink.