SDLP And Slugger O’Toole…Catch Yourself On, Mick!

Posted on October 23, 2015 by fitzjameshorse

So Slugger O’Toole has issued an invitation for a SDLP Leadership hustings event with local journalists and an audience of SDLP members. Thats awfully decent of Slugger O’Toole.

After all, in May this year in East Belfast, Slugger O’Toole did not want to know SDLP views and staged a hustings event without SDLP. They didnt want us about the place. So be prepared for an article in which Mick Fealty expresses  disappointment that one of the candidates (Alasdair McDonnell) has not accepted the kind invitation.

It takes two to tango….it takes two or more candidates to have a “hustings”. And if Alasdair says “no” then thats an end of it. Whether there SHOULD be hustings or not is totally different.

For the record, the SDLP Leadership contest in 2011 might be a useful guide. The contest took place after the Leader Margaret Ritchie resigned. There was, I recall a series of hustings, attended by SDLP members and the Media were not invited….and the final hustings took place on the Friday night of the SDLP Conference at the Ramada Hotel and the voting took place on the Saturday.

For some years, I have fought the SDLP corner on Slugger O’Toole …and without much gratitude by SDLP. In the guise of four or five screen names (usually brought about by forgetting “log in” details)….FitzjamesHorse 1746….Fitzjames Horse…or my own name … I daresay on thousands of occasions.

In May of this year, after the lack of clarity on publication of a cartoon by Brian Spence, I made the decision not to contribute in any form to Slugger. Even if I wanted to so do, I cant.

It mystifies me that SDLP continue to facilitate Slugger O’Toole…by accrediting Alan Meban and David McCann at SDLP events. David McCann  was at last nights launch of Colum Eastwood’s campaign and I believe another Sluggerite was mooching about.

Take a look at this. A SDLP-organised event on 2nd November at the Lyric Theatre in Belfast. A discussion on Civic Society, chaired by Alasdair McDonnell. And who is included on the panel of speakers. 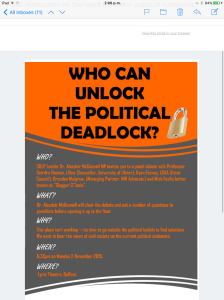 We never seem to learn. The Press Office, MLAs, Councillors and indeed rank and file SDLP members really need to learn how to play “hard ball” .

I get as fed up as Colum Eastwood. I am fed up with SDLP members telling each other that this columnist ot that columnist in the “Irish News” never says anything good about SDLP.

Whether the next Leader is Alasdair or Colum….we need to deal with this.