Posted on August 4, 2015 by fitzjameshorse 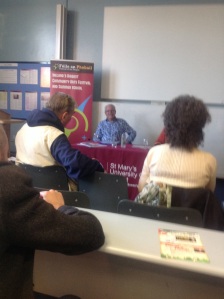 As you all probably know there is an Orange parade held in County Donegal on the Saturday before the Twelfth (of July) each year. Robert Ballagh began his talk by referencing the Deputy Grand Master of the Orange Lodge (Mr Henning) and his speech to Orangemen this year.
Henning told his Brethren that he saw no problem with Republicans commemorating the Easter Rising next year.
This was interpreted as a “positive” gesture by unionists but Robert Ballagh saw it as patronising. Republicans do notneed the permission of unionists to commemorate the seminal event in Irish National History.
The views of “Official Ireland” on next years commemoration are views that Robert finds more “worrisome”.
“Ireland Inspires” the video used to outline the context of the “official” commemorations…and first shown at uthe General Post Office in November 2014 was a debacle. In the very place, where The Republic was proclaimed…there was no reference to the seven men who signed the Proclamation (and later executed for it) but the Queen of England, Ian Paisley, Bono, Bob Geldof and Brian O’Driscoll (the rugby legend) all appeared.

Referencing, the old rebel ballad, “Who Dares to Speak of ’98” (ie the 1798 Rebellion), Robert Ballagh asked pointedly “Who Dares to Speak of 1916”. The Irish people are being asked to be “mature” and realise that our history is “shared”. It has even been suggested that a new wall is built in Glasnevin Cemetry should name all the dead from 1916…including British soldiers.
Robert noted that the fourteen patriots who were executed by firing squads ffrom the Sherwood Foresters. It was a “reward” …as this regiment was the British regiment which had suffered most casualties.
To recognise the Sherwood Foresters with a plaque near Mount Street in Dublin where they were in a gun battle witha smaller Rebel force…was akin to unveiling a plaque to the German Luftwaffe in London.
Self-confident nations would not even consider it.
“Official” Ireland is burying the singular event of the Easter Rising in a welter of other anniversaries concocted as a decade of centenaries.
In rushing to commemorate everything, we commemorate nothing special.

The Men and Women of 1916 wer not merely rebels, they were visionaries. Noting that the old lie that the Daily Telegraph had reported that O’Donovan Rossa had made a deathbed confession, repenting his Republican past and urging Irishmen to fight the Germans were the real enemies of “civilisation”, Robert Ballagh called for Honesty about the Rising.
I wonder did he know that Beechmount Sinn Féin think Rossa was executed.
There will be alternative commemorations to Official Ireland.k
Uu,ypty p
B

nces Black, Sinead O’Connor and Damien Dempsey and Adrian Dunbar, the actor.
The title deeds of the Republic of Ireland belong to the citizens of Ireland. We must work to reclaim it from politicians and bankers.

Question and Answer Session. I will blog about this later.

This entry was posted in Uncategorized and tagged 1916, An Féile, Easter Rising, Robert Ballagh, Sinn Féin. Bookmark the permalink.