Several years since I spent any meaningful time in Glasgow.

It has changed…a lot. My first visit in early 1970s, the Gorbal tenements were still there and the City carried a lot of the nasty sectarianism of Rangers (mostly) and Celtic (less) and “Taggart” -style menace as well as the Billy Connolly-style humour and the late-night pub brawls in Renfrew Street. 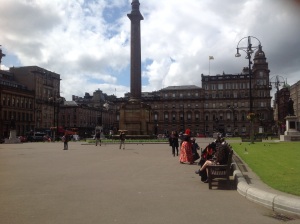 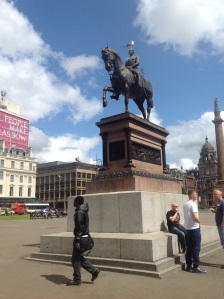 Arriving in the city at Buchanan Street Bus Station, there is an immediate awareness that this city is proud of itself…frankly in a way that neither Belfast or Dublin can match. Maybe I am just overly familiar with the two largest cities in Ireland. The hotels in and around the City Centre and the Buchanan Galleries Shopping Centre show a city on an upward spiral.

I dont ever recall Buchanan Street being this exclusive in shopping terms. Entire shopping arcades selling expensive jewelery. Who can actually afford this? Besides footballers at Celtic FC?

George Square is still George Square. The pillar with whatever “King George”, who gives his name to the Square. This is “Establishment”…Georgian meets Victorian…Robert Peel, William Gladstone and the Cenotaph. This is the Square where Glasgow comes together. Unlikely equestrian statues of Victoria and her consort Albert…it seems a parody.

But even in the days when I visited more often, George Square looked dated and a relic. City of Empire was nineteenth century. There was a different narrative for the twentieth century.

For Glasgow was the “Red Clyde”. The shipyards and the factories might well have been in terminal decline in the 1970s but this was solid Labour. The Scottish Nationalists were confined to the Highlands and little more than an irritant. They would never challenge Labour in Glasgow and  across the great central bank of solid seats.

This was the Scotland of Gordon Brown, Alastair Darling, Robin Cook, John Reid, John Smith…Donald Dewar ….and it was all swept away less than three months ago. The SNP took 56 of Scotland’s 59 seats. Neatly the Labour Party, Conservative Party and the Liberal Democrats have one seat each.

Donald Dewar was the Secretary of State for Scotland in Tony B Liar’s first government after 1997, He died around 2001. But his big idea was that a devolved Scottish Assembly would neutralise Scottish nationalism. When he died, he was quite well respected and they even erected a massive statue to him outside the Buchanan Galleries. It now seems premature.

The SWP people were really nice guys. They promised to pass my good wishes to Vanessa Redgrave. Interestingly Labour still controls the Glasgow Council but will be swept away in the next local election. I was told that Labour doesnt like the politicalisation of the City’s most exclusive shopping area. And I was told that SNP, who dont have a stall in the street (they dont need one!) will be much more tolerant of the fringe left-wing groups. 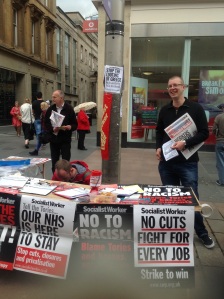 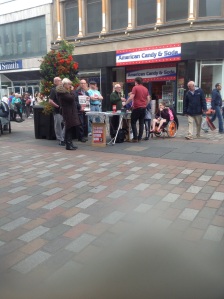 There is an integrity about the re-generation of Glasgow. It needs no Giro d’Italia or World Police and Fire Games. It needs no Tall Ships Race or Titanic crap. There is no “Bread and Circus” here. No LetsGetAlongerism. Just a quiet confidence…as quiet as the bi-lingual sign in Queen Street Railway Station, barely one hundred metres from Queen Victoria unlikely sitting on a horse, looking very imperial. She would not be amused. But she better get used to it.