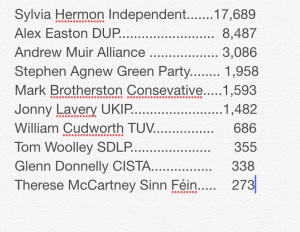 Easy for Sylvia Hermon. Her voters come from all “Assembly” Parties. Its almost as if North Down has decided to be apolitical…at least at Westminster level. If Sylvia Hermon endorsed a candidate in 2016, the candidate would certainly get a quota but I think she values her Independent status too much.

Only DUP can be reasonably satisfield with their performance. It is certainly a quota. But well short of the three seats they hold in the Assembly.The UUP did not stand and probably there is a quota hidden within the Hermon’s vote.

But Alliance and Greens, both of whom have Assembly seats are well short of a quota. A wake up call that their supporters basically prefer the apolitical stance of Sylvia Hermon.