In this seat, Pat Doherty veteran Sinn Féin MP was returned fairly easily but he did lose a lot of votes. His chief asset was that he was the Incumbent and that is always an asset. But this was also an election which was as much about generation as anything else. Doherty (68) looked like a man who would rather be somewhere else than in West Tyrone. Well ….he lives in County Donegal.

On the face of it, little changes can be anticipated in 2016. I am not so sure that I am convinced of the easy analysis that this is going to produce three Sinn Féin seats, one DUP, one UUP and one SDLP. 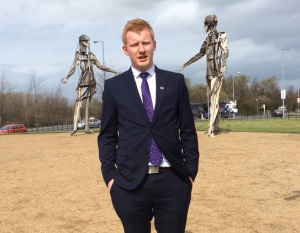 I always believe that the sixth seat in any constituency is the tricky one. So I tend to go beyond the stark figures to whats happening on the ground. There are key differences between Westminster 2015 and Assembly 2016.

For a start, we cant predict the issues that will be prominent next year. What we do know is that this is a six seat constituency where members are elected on Proportional Representation.

So I tend to see West Tyrone as two Sinn Féin and one each for DUP, UUP and SDLP. And the sixth seat is up for grabs. There are over 2,000 possible minor party votes to be transferred from the figures above. Do Alliance, Green and “Cannabis” votes break more for SDLP than Sinn Féin?

I dont know the answer. I just say it is a fighting chance.

I first saw Daniel making a speech at the 2011 SDLP Conference. His Strabane Branch won (actually shared) the SDLP Award for Achievement. He made a speech …amazingly confident for a young man. But tellingly his speech pointed out that the word on the Strabane doorsteps was that the people had not left the SDLP. “The SDLP left us”.

To me that was crucial to understanding the position of SDLP found itself a few years ago. Something the Party needed to hear. There was enough progress in 2014 Council Elections to show that SDLP had turned a corner in West Tyrone. So the result last week is an incremental improvement.

SDLP will be looking for more improvement. Dan is now 90% established in West Tyrone. He can become 95% established by the autumn. If Joe Byrne steps aside and Dan is co-opted. Id expect Dan to feature a lot on TV News over the winter and spring. The target has to be a minimum of 8,500 votes at the Assembly. In the Assembly elections of 2016, that is where Dan becomes 100% established.

Two things. Joe Byrne MLA has been totally selfless in promoting Dan. Joe is to be congratulated in findIng young talent. Joe will be happy to pass the the baton on.

This is an excellent opportunity for SDLP to strike while the iron is hot.