It always seems that the biggest insult to a political party is to accuse them of a “U Turn”. Sinn Féin fielded John O’Dowd to try and explain the debacle over Welfare Cuts. 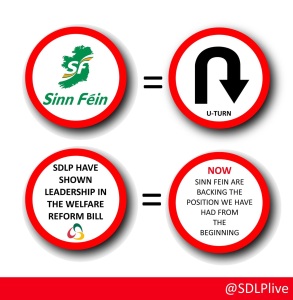 It is all a bit awkward for Sinn Féin. For months they have been posturing as the Party leading the fight against “Tory” (sic) Cuts. They even started petitions in Belfast City Centre. That was a curious petition. Who was behind it? Seemed that petition was quietly shelved…before Sinn Féin signed up to the same Tory Cuts.

It was of course all part of a broader Agreement. ..or pretend Agreement. But why did Sinn Féin fold? Well, they would claim that as a Government Party, they are being “responsible” and “making difficult decisions” and had bought some key concessions. And they depicted SDLP who still refused to sign up to “Tory” cuts as irresponsible and acting like an Opposition.

So can we assume that those new Sinn Féin southerners are maybe just a little bit concerned that Sinn Féin in government is not quite as consistent as Sinn Féin in Opposition.

But it is not about one Sinn Féin U-Turn. SF held their annual conference in Derry last weekend. Something magical happened. They changed their minds. They wont implement “Tory” cuts.

What went wrong? Were Sinn Féin canvassers in Norn Iron (the Westminster Election is only eight weeks away) getting hammered on the door-step. Were SDLP starting to look attractive to some SF voters.

Sinn Féin spin it that they were sold a pup…the “extra” money that they were “promised” isnt there. They are victims of “bad faith”. Bad Faith? Presumably they mean that DUP could not stop crowing about their victory in negotiations.

What happens next? Well, it will be sorted….AFTER the Election. Sinn Féin will talk tough for eight weeks ….and fold ….again.