Before the 2008 Presidential Election, opinion polls were showing that Barack Obama was getting approval ratings of more than 80 per cent…in Europe. I think that is normal. Europeans tend to identify more with Democrats than Republicans. And there was that George Bush factor…the Fux News Factor….the Palin Factor. And there was a sense that History was about to be made.

But as Obama was being elected, I could not really bring myself to be as excited as many other Europeans. My reasoning was simple enough. All American Presidents do that (arrogant) thing, where they assume the Leadership of the Free World…….that is of course, the American version of “Freedom”. And it is natural that an American President will do anything to preserve American “interests” abroad and it will follow that this will create tension with allies or those that just wish USA well.

Yet Europe lost all sense of detachment with Obama. The awarding of the Nobel Peace Prize………..sadly Satire died when Henry Kissinger was awarded the same prize….was risible.

And of course in Ireland we loved Obama……….Sure didn’t his ancestors come from Ireland ….he was one of us. To be sure…To be sure. Moneygall, County Offaly………..here’s a fridge magnet from the FitzjamesHorse family fridge.

And as recently as last year Obama came to Belfast……….and cheered to the echo. They loved Barak. They loved Michelle.

Indeed earlier this week, Obama mentioned  “Ireland” but not in a good way. He told a TV interviewer that he had a problem with American firms “magically becoming Irish” for tax purposes. Well I aint no capitalist but it strikes me that if American firms have been exporting jobs all over the world to save money…then logically they would export tax revenues.

Please send me your answer on a postcard….but obviously not THIS postcard. 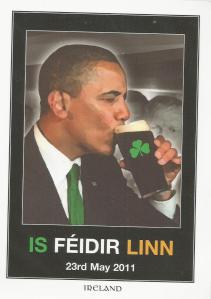 This entry was posted in Uncategorized and tagged Obama. Bookmark the permalink.