Posted on March 3, 2014 by fitzjameshorse

Yet here in Norn Iron, we have our own problems with celebrating St Patrick’s Day in those “public, shared spaces” like the City centre in Belfast.

Now at least, in Belfast the parade is legal.
And yet in Downpatrick, Armagh and other places in the North, there will be the inevitable row if someone dares to show up at a parade with the National Flag.
For even on St Patrick’s Day, the National Flag of Ireland is unacceptable to unionists.
Shame on them…but its only to be expected.
Shame too on the LetsGetAlongerists who tell us the National Flag is not…”inclusive” enough. This …from the same mindset that brings us “Orange Fest”, the bizarre attempt to sell Orangeism as a day for us all. 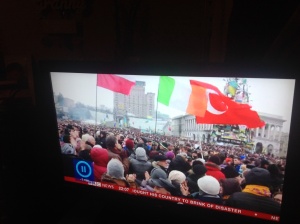 Some of our favourite LetsGetAlongerists will attend the American consulate in Belfast to celebrate the Fourth of July. They will also have the hot ticket for the French Consulate on Bastille Day.
If you are in a Doctors Surgery waiting room you will see some of the top LetsGetAlongerists at these functions…just look at the September issue of the Ulster Tatler.
If the LetsGetLongerists had any sense of decency, they would not turn up …because of course the American and French National Days are hardly…”inclusive”. The Stars and Stripes and Le Tricolere will be on show.
And of course quite properly the Great and Good of Belfast LetsGetAlongerism will celebrate with our Indian, Chinese and other residents, on their “Days” to demonstrate their liberal credentials.
Yet the only people in Norn Iron who can be ridiculed and marginalised with impunity are the Irish. All to appease people who hate the Irish nation and all it stands for.
Shame on the LetsGetAlongerists.
Shame on “nationalist” councillors who facilitate it.

Hopefully none of my readers will be upset by the photograph of the National Flag of Ireland. It was being carried in Kiev, Ukraine yesterday. Isnt Freedom a wonderful thing?

This entry was posted in Uncategorized and tagged Letsgetalongerists, St Patricks Day. Bookmark the permalink.