Dr Alasdair McDonnell is Member of Parliament and MLA for South Belfast. This is possibly the most subtle of all constituency offices. 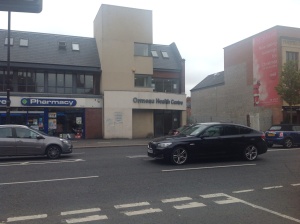 Alasdair, SDLP Party Leader is now retired from his practice as a medical doctor on the Ormeau Road. As I understand it, he was not actually based at this health centre.
There is no signage outside. A medical practice occupies the upper floors and Alasdair’s office is the Ground Floor.
I actually spoke to Alasdair’s staff about this. It actually works well. The key thing is that everybody knows where it is. A considerable number of the local population visit the Health Centre regularly. The “foot fall”…people who visit the Health Centre and then visit the SDLP office for advice on issues…is an important part of this office.
Traditionally, South Belfast is viewed as a middle class area dominated by Queens University but it has some deprived areas, notably around Donegall Pass (loyalist) and Markets (nationalist). Both of these communities use the Health Centre and both seem to use the Advice Centre.
The make-up of Assembly seats in South Belfast is important. SDLP hold two Assembly seats, Sinn Fein, Alliance, DUP and UUP. Alasdair holds the Westminster seat…and in City Council terms, its a good SDLP area with two councillors in Laganbank and two councillors in Balmoral.
The Health Centre IS a form of neutral territory. It would be inappropriate to have signage, promoting a political party.
And yet there are certain advantages. A constituent from a loyalist background…or indeed Sinn Fein might not want to be “seen” entering a SDLP office.
A considerable amount of the constituency problems handled here are from from across the demographic divide.
The other SDLP office in South Belfast is on the Lisburn Road and is run by Conall McDevitt MLA.