Posted on August 9, 2013 by fitzjameshorse 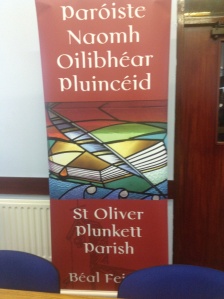 It was interesting watching the audience arrive. Some (elderly) parishioners from St Oliver Plunkett, a sprinkling of ecumenical people, academics and some men with that whiff of cordite that people like me can recognise. And a former Sinn Fein MLA prominent.
Professor John Brewer has the new Chair on Reconciliation at Queens University.He began…with a nod that he was off his usual academic beat by pointing out that people had “firm opinions…wrongly held”. And debate around these issues was usually between other academics.
The Conflict was not Religious. It was political in substance and took on a religious form. Indeed the RELIGION IDENTITY and TERRITORY Conflict was Familiar from the Old Testament.
This caused two problems. The institutional churches were associated with one side or the other…and this fear of association limited the response of the churches. There was never any encouragement for violence preached from the pulpit of any institutional church.
Churches WERE citicised for being “political” usually from the Other Side.
The INSTITUTIONAL Churches did little beyond grand statements condemning Violence.Churches lacked the knowledge to deal with the problem. They were fearful of engagement and fearful of feeding into the stereotypes that they were prrceived as being committed to one side or the other.
Despite this failure of Leadership, individual churchmen DID step forward. Often acting without “authority”. But these people were mavericks and independent thinkers, often detached from the instiutions…from cross-community organisations such as Corrymeela or religious orders such as the Redemptorists.
The Politics demanded Secrecy.
Things DID go on behind closed doors.
There HAS been Conflict Transformation. There has been no Social Transformation.
Ex-Combatants rejected the Institutional Churches and had been rejected by them.
Any conversion away from Violence was more often to Politics rather than Religion.
Ex-prisoners had been grateful for the help they …and more often …their families had received from Churches.
Politicians had failed. They should be ashamed.
Professor Brewer said that churches and civic society…” churches, universities, women, trade unions” need to be involved.
Surprisingly perhaps Professor Brewer, said that Victims should not veto the process. In any case, the connexion between Victims and groups that speak for Victims is not that strong. Surveys indicate that Victims are actually much more understanding of ex-combatants than the general population.
There was a lively Question and Answer Session.Apparently fifteen in all.
For me…thru no fault of the Chair, a disproportionate number of these contributions came from men….always men….who began their speech/eventual question with a prologue ” I am an ex-combatant…ex-prisoner….I am an athiest…. I think the Churches need to…..”
While Professor Brewer had pointed out earlier that these voices needed to be heard and that victims had no veto….the same is of course true of the ex-combatants.
I am NOT a victim. Most people are not Victims.
I am NOT an ex-combatant. Most people are not Ex-Combatants.
Some in both these groups have been treated appallingly.
Some of the most vocal advocates of Victims AND ex-Combatants have been pampered and over-indulged as they press the “guilt” button.
I have often used this Blog to point out that Victims Groups are disparate and that Victims themselves are highly individual.
Some want nothing at all, other than to get on with their lives. Some want “The Truth”, with or without Justice. Some want Cash. Some want Revenge. Some want a side order of a Pound of Flesh. And some want a Veto on any Progress….some for ever.
But the most interesting aspect of An Feile has been that just about every event or every social contact this week has involved the words “Im an ex-prisoner” (which is incidently code for a bigger statement).
The ex-prisoners….of course there are some just getting on with their lives…either at ease with the Process or cynical about it. But theres a hardcore vocal group that can pull the strings of the nominal Leadership in Sinn Fein.
The biggest minority group in West Belfast is NOT Poles or Czechs. It is “ex-combatants” and really time that they integrated into Society.
I know sincere ex-combatants when I see them. Many were after all friends and neighbours.
And I know spoofers and chancers when I see them. Many were after all friends and neighbours.
And there IS a lobby here of people “cute enough” to use the system that Conflict Resolution provides.
I did ask a question. It was maybe not as nuanced or as coherent as the written version below.

ALL CONFLICTS END. American Civil War ended at Appomattox. WW1 in a railway carriage at Versailles. WW2 on USS Missouri, Vietnam when the helicopters left US Embassy. And these Conflicts ended in Victory and Defeat. The Victors imposed the Resolution on the Vanquished…An end to Slavery, the end of the German and Austrian monarchies, De-Nazification in Germany, re-education camps in the Mekong Delta.
Our Conflict ended in Creative Ambiguity. A stalemate and the minimalist Agreement. Sold as
Stepping stones to a United Ireland
Or
Obstacles to a United Ireland.
It might be one or other. It might be neither. It is not both.
We stook second steps with Policing and Power Sharing.
And STOPPED. Did not deal with other issues such as Irish Language or Victims.
We have PASSIVITY. And it is ENOUGH.
We cant proceed to the third step of social engineering. Nor do we deserve to.
DOES CONFLICT RESOLUTION NOT JUST ATTRIBUTE VICTORY AND DEFEAT AND IS IT NOT SIMPLY AN ATTEMPT BY LETSGETALONGERISTS TO CREATE A LIBERAL UNIONIST STATE…TO UNDERMINE THE DEMOGRAPHICS.

Professor Brewer did not see it this way. There is VICTORS PEACE which often results in the annihalation of a Culture North American tribes etc). Even where this does not happen, it can have long term resentment (Ireland for example) leading to even more conflict. Nor did Professor Brewer see the emergence of a liberal unionist state as I had feared.

On reflection I dont actually see a liberal unionist state as inevitable, although we COULD sleep-walk into it.
But what I see now is that there are two distinct types of Conflict Resolution.
One it might be said is RELIGIOUS. A recognition that GOD is not a unionist or nationalist. “Progressives” in Catholics and Protestant faiths see that. BUT there is a SECULAR Conflict Resolution. A letsgetalongerist check-list of initiatives to promote a liberal unionist Theme Park.
The RELIGIOUS and SECULAR Conflict Resolutionists…their worlds are entwined. They sink and swim together.

This entry was posted in Uncategorized and tagged An Féile, Conflict Resolution, letsgetalongerism. Bookmark the permalink.