Strange thing….in Derry yesterday…I was taking some photographs in the Bogside and I saw a young woman in a wedding dress walk past the famous mural of Che Guevara. Nothing really unusual in that. My assumption was that she had just got married and was showing off her wedding dress to an elderly house-bound relative.

But as I walked down Shipquay Street I saw another bride on foot……..I went into the Tower Museum (where incidently the Jacobite exhibits have been scaled back) and went to the fifth floor…the roof. A young and very friendly attentandant from the museum was taking photographs of GuildHall Square. Standing on a chair which she could not let me use (Health and Safety reasons) she kindly took some photographs for me. More importantly she explained what exactly was going on. I also took some photographs at ground level. 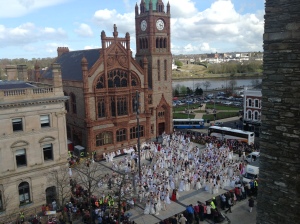 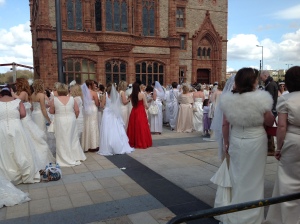 It might look like the wedding registry office in the Guild Hall has been overbooked due to a computer problem resulting in every Derry bride being given the same time and date. Or it might look like potential Derry brides have been hereded into the Square to be chosen by eligible men such as myself (Mrs FJH permitting). 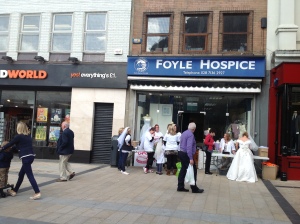 But it was an attempt at a world record …most “brides” in one place….with the Foyle Hospice benefitting from fund-raising.

Still leaving Derry after 5pm……and travelling in a SDLP Youth minibus along Strand Road…..it was still bizarre to see so many groups of “brides” in the pubs.

This entry was posted in Uncategorized and tagged Brides, Charity, Derry, Foyle Hospice. Bookmark the permalink.